Nothing quite finishes off an outfit like a great hairstyle.  And when it comes to historical outfits and reenactments, like it or not, the right hairstyle is vital.  Nothing, in my opinion, ruins a lovely historical gown then a scrunchie and a messy bun.  I have seen it.  It bothers me.  You definitely do not need to create some elaborate design, but a proper bun or braid just makes such a difference!

In my experience, the length of hair really isn’t all that important, as there are many tricks and pieces to use.  In fact, I have shoulder length hair and have no trouble creating a passable 1850’s look.  Even those with short hair can use extensions, winglets, appropriate caps or nets etc. to help maintain authenticity.  While I have limited experience with the unique Apollo knot styles of the 1830’s, the majority of the styles from the 19th century can be recreated with a bit of practice.

Several years ago, I created a few tutorials for hairstyles.  They are linked below:

How to Make a Hair Rat – The Modern Way

END_OF_DOCUMENT_TOKEN_TO_BE_REPLACED

I love to bake…I even enjoy cooking dinners most nights of the week!  😉

However, when it comes to reenacting, I have had very limited experience, as I tend to focus and highlight sewing and fashion.  Over the summer, however, I was able to connect with the Foodways Historian at my local museum and just watch her in action.  While there is most definitely a method and way to cook over fire, it is also surprisingly simple.  Precaution must be taken when cooking near an open flame and when touching and handling the tools, but anyone who has a little knowledge of baking and cooking will see the similarities of modern and historical food preparation.

Today I have collected a few recipes perfect for cold, chilly days and the holiday season.   While these are unlike recipes we see today, I;m sure those of your who like a challenge and figuring out puzzles, will enjoy these 19th century recipes!

END_OF_DOCUMENT_TOKEN_TO_BE_REPLACED

Today I want to share with you a few of my favorite things that help make my sewing and reenacting just a little bit easier.  For the most part, these items are simple in nature, inexpensive and relatively easy to find.  But don’t let their simplistic nature fool you, all these are immeasurable in their usefulness!  I have also done my best to link each item mentioned.  I hope you enjoy!

PART ONE – My Favorite Sewing Things

As I mentioned above, none of these items are all that fancy.  But I have found them to be true workhorses and my go to items.  As you begin to build your own sewing and reenacting tool kits, take note of what works and doesn’t work.  And while we always want to be as accurate as possible, sometimes a little modern cheat can make a difference between freezing or enjoying your event!

When I first began this blog almost 8 years ago, I created a post on how to properly fold a gown.  I referenced it numerous times over the years and decided the overall look needed updating.  So unlike the first post which was only pictures, this time I recorded it!

But first, why is it important to learn to properly fold and store a gown?  I know that I have many newbies make the critical mistake of hanging their one piece, 5 yard gowns on metal hangers.  Then a month or so later when they wish to wear the gown, they discover the damage the skinny hanger did to the shoulders and the strain put on their hand stitches.  Unless your gown is two pieces (where the bodice can but hung but the skirt folded) folding your gown really adds longevity and preserves the shape and design of the gown.

But what about in the 19th century?  Didn’t they have hangers?  Well, yes.  Hangers were around and would be used (for those who could afford closets and more then one garment) for pieces that were light enough such as men’s garments, children’s clothes, and bodices.  Otherwise, gowns were hung on hooks using long ties sewn to the waistband of the interior of the gown.  The gown would hang with the bodice laying over the skirt portion inside out.

Yet for seasonal gowns, or if you lack closet space, folding your gown really is the best option.  And this particular method, taken from a late 1830’s guide, creates a nice little bundle that can be safely stored for travel or long term without damage to the gown.  Once the gown has been folded, you can either wrap in plain white tissue paper or brown paper.  Avoid anything with a pattern or dye to avoid staining your gown.

Ready to learn how to fold your own gown?

I hope this tutorial has been helpful!  Remember, this technique can be used for both gowns and undergarments. 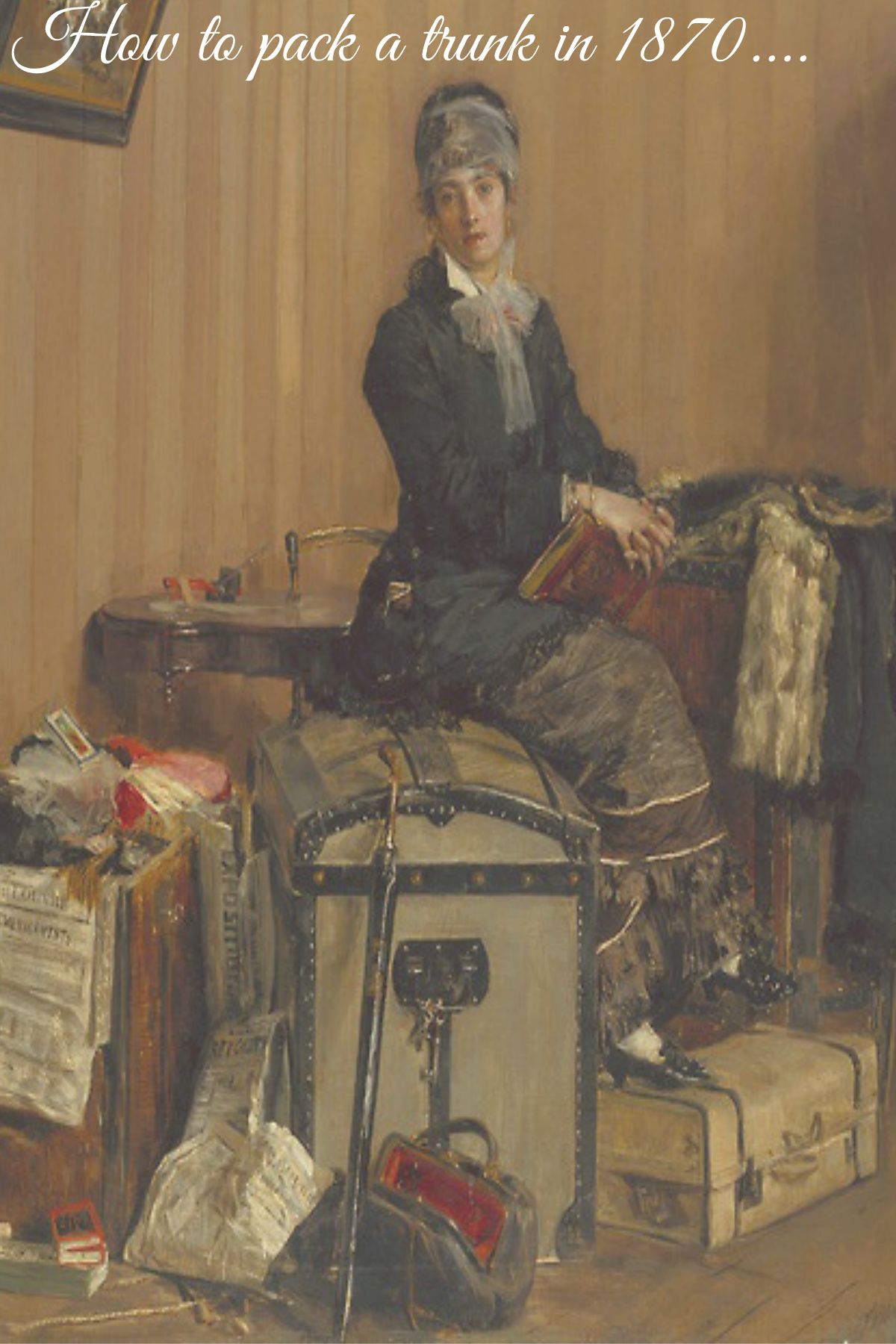 At some point in our lives we learn the best way to pack a suitcase…maybe.   Whether we learned it from a parent, an instructional tutorial, or through trial and error, efficiently packing a suitcase is a much desired skill that makes the difference between being prepared or being caught without some needed item.  When you take into account all the restrictions placed upon modern travelers, properly packing a suitcase is almost an art form in itself.  Except when on the way home from a trip….then everything just gets shoved in and quickly zipped up!

But if you are planning on traveling for a major historical event, and need either advice or some tips, then I’ve got you covered!  I know that using a steamer trunk on a plane isn’t feasible – probably not even if you drive in a car.  But between large, compartmentalized suitcases, or even large tupperware containers,  proper storage can happen.  And when you need upwards of 15 items per ensemble, organaization is key!

To learn how a woman in the 1870’s should pack for a journey from author Annie Frost, read on:

END_OF_DOCUMENT_TOKEN_TO_BE_REPLACED

NEW PATTERN RELEASE! This is such a fun project for those looking to expand both their historical wardrobe and their historical sewing skills. Based off a fashion plate from 1860, this quilted Zouave Morning Jacket is both unique in its design and its history. For today only (12/1/22), save 20% by using code ZOUAVE20. Offer valid on both the jacket pattern and 1860’s Quilted Pattern Bundle. LINK IN MY STORIES. #aimeevictorian #aimeevictorianarmoire #historicalsewing #historicalsewingpatterns #1860sfashion #19thcentury #19thcenturyfashion ##1850sfashion #historicalundergarments #historicalouterwear #1860swrapper #pdfpattern #selfdraftedpattern #historicalseamstress
Last day of my November sale! Link in profile!
I hope you all have a wonderful and relaxing Thanksgiving! 🦃🍁🍂
If ever there was the perfect holiday gown duo, this late 1850’s fashion plate would be it!!
AVAILABLE EARLY DECEMBER - This has been such a fun and challenging garment to create and I can’t wait to share it with you all! From the background to the unique pattern construction, this Morning Jacket is the perfect piece to add to your historical winter wardrobe.
🇺🇸My two week long sale starts today! Link in profile or visit my stories!