Last week, we talked all about my process of creating and designing historical gowns.  But that led many to ask:

“How do I get into historical sewing?”

And the answer is ABSOLUTELY YES!  Join me as I chat about what exactly historical sewing is, some easy beginning patterns and pattern brands to try out, along with tools you will need!  ***Hint – you probably already have everything you need! 😉

Helpful Links to Get You Started:

Intro to Patterns from Books

There are of course many, many other wonderful blogs and costumers out there, but these are my number one go-tos!

Join me next time for a chat all about vintage sewing! 🙂

“Aimee, how did you make that?”

“Wish I could figure out how to design a gown like that!”

Well, I’ve been listening and have decided to share the process I go through when I design a historical gown.  From original inspiration to my next steps, you will learn about what books and patterns I go to first for help along the way!

Have another topic you would like me to chat about?  Dying to know some of my construction or designing secrets?

PS: The book I was referring to is Fashion: The Collection from the Kyoto Fashion Institute. 🙂 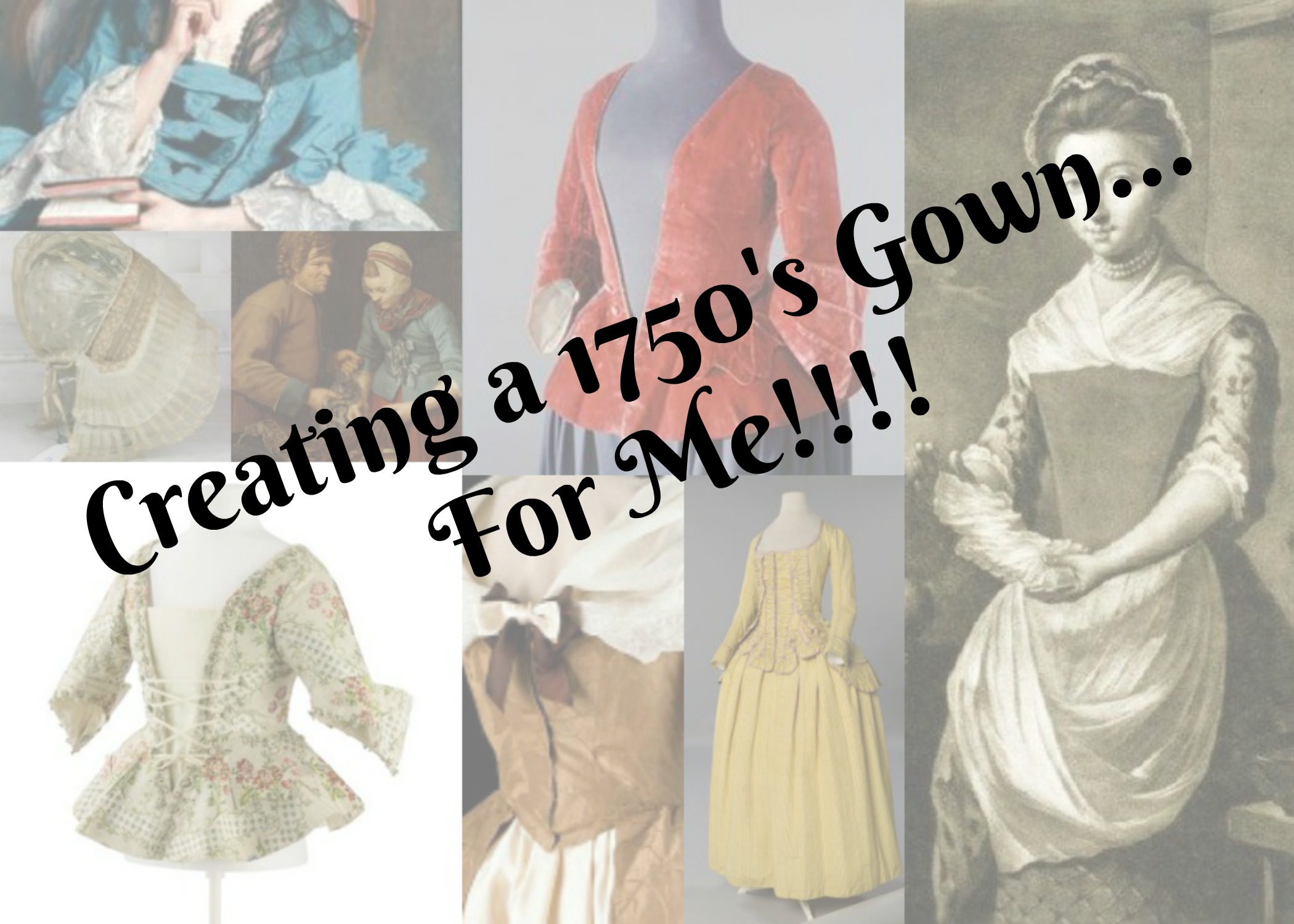 You see, I don’t often sew for myself.

I think the last time I created a gown just for me was at least a year ago.  Most of the time, whenever I sew it is either for a client or to sell on my shop.  But with a little more free time on my hands (thanks to longer naps by my little one), I wanted to try something new and different. …something for me! 🙂

After thinking about what I wished to create, I decided on an outfit to wear at next year’s French and Indian War Reenactment…in July.  The tricky part about making a gown to wear in the summer while it is still winter is the fear that I am going to sweat like crazy!  More about that later!

So, as always, whenever I begin a brand new decade or project apart from the norm, I begin with an inspiration board.  This is where I gather images of actual gowns, paintings, or pieces of a gown I want to try and incorporate.  The problem with this particular gown is I wanted to include WAAAAY to many aspects and techniques, so I had to really cut down.

Here is the inspiration board of this particular project:

END_OF_DOCUMENT_TOKEN_TO_BE_REPLACED 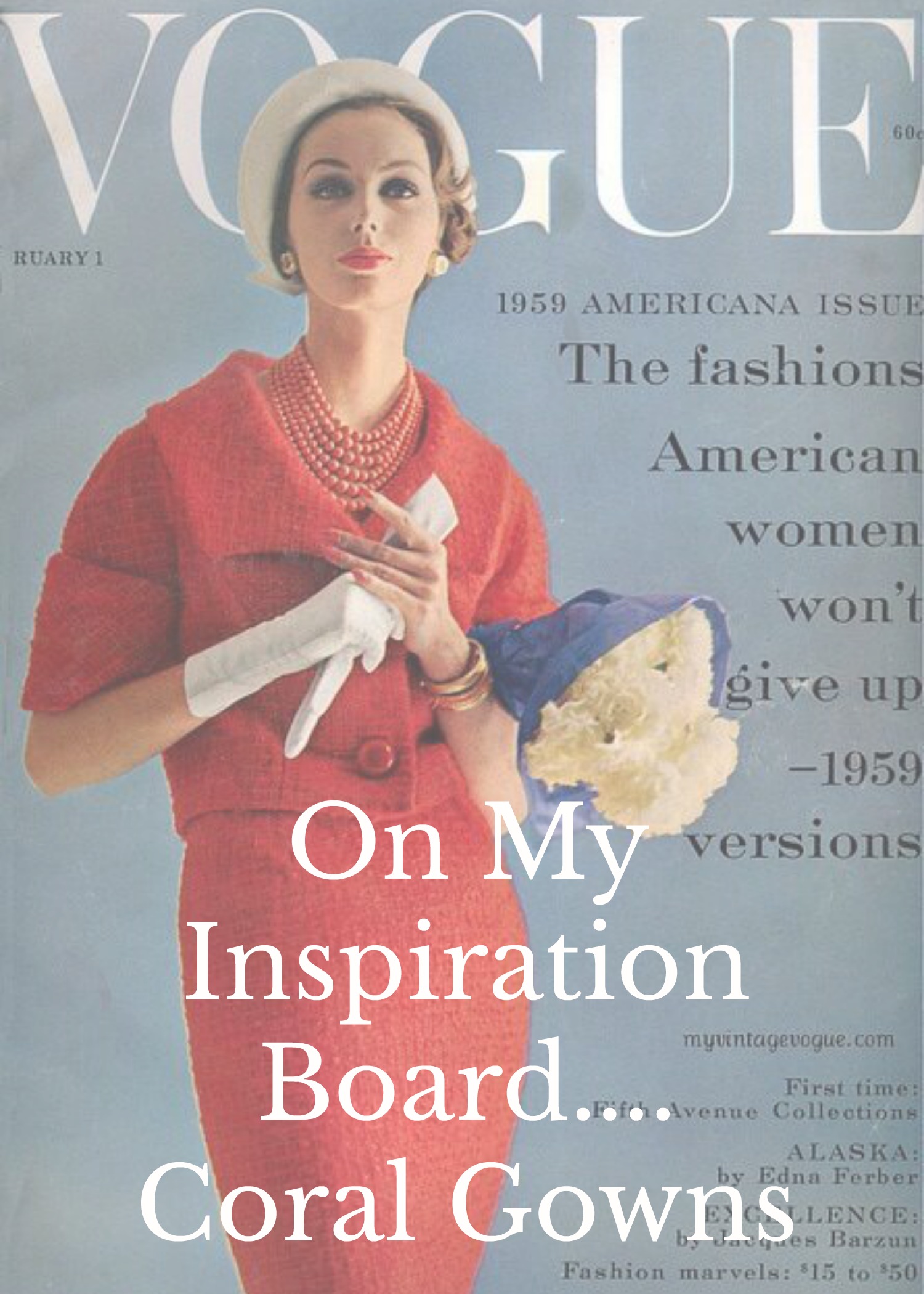 I can’t believe we are already at Thanksgiving!  While I feel that the summer went by at a normal pace, this fall has simply flew!!

I have been very busy sewing these past days, not only getting ready for Black Friday and Cyber Monday on my shop (click HERE to see all the deals), but also with some fun projects just for the heck of it!  One such project, was this 1810’s day gown in such a fun shade of coral-ly pink.

END_OF_DOCUMENT_TOKEN_TO_BE_REPLACED 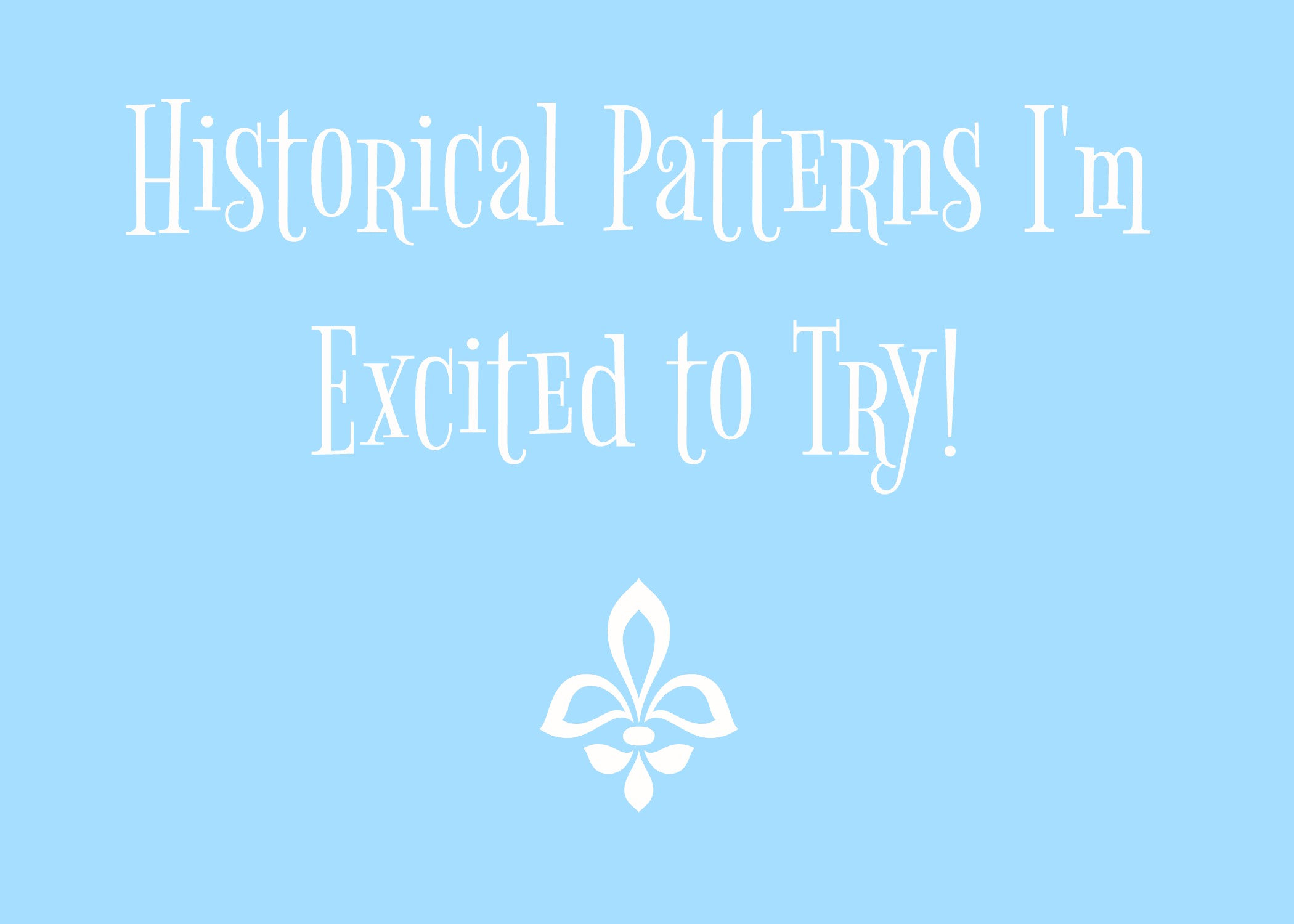 I think I have drained my current pool of patterns.  I mean, I love many of them and will always use them…but, I’m am definitely feeling a little bored.   Especially with my due date coming closer and closer, I am trying to stay occupied with sewing…it’s sort of working! 🙂

So yesterday, with the warm sun on my face, I spent a little time looking up some new and different patterns to try.

Here are a few of my favorites!!!

Links to the patterns are below each image!

I love the unique and various caps in this particular pattern.  Especially the Round Eared Cap with double ruffle!!

I am sure anyone wearing this amazingly beautiful, pleated mantle would feel elegant and very summery!  The only thing I’m not sure of is what fabric I would use…..

With a yardage requirement of 16 yards, this gown would definitely be a commitment, but I love all the ruffles and draping!  I would also want to use a polka dot fabric just like the sample photo below!

1873 Dress Pattern from Patterns of Time

One should have just as pretty undergarments as outwear, and this pattern has a wonderful range of options!!!

The front draping on this 1930’s dress is amazing!  I’m pretty sure I will have to redo it several times until it hangs just right, but its all in a day’s work! 🙂

Have you found any new historical patterns that you just adore?

I would love to hear from you! 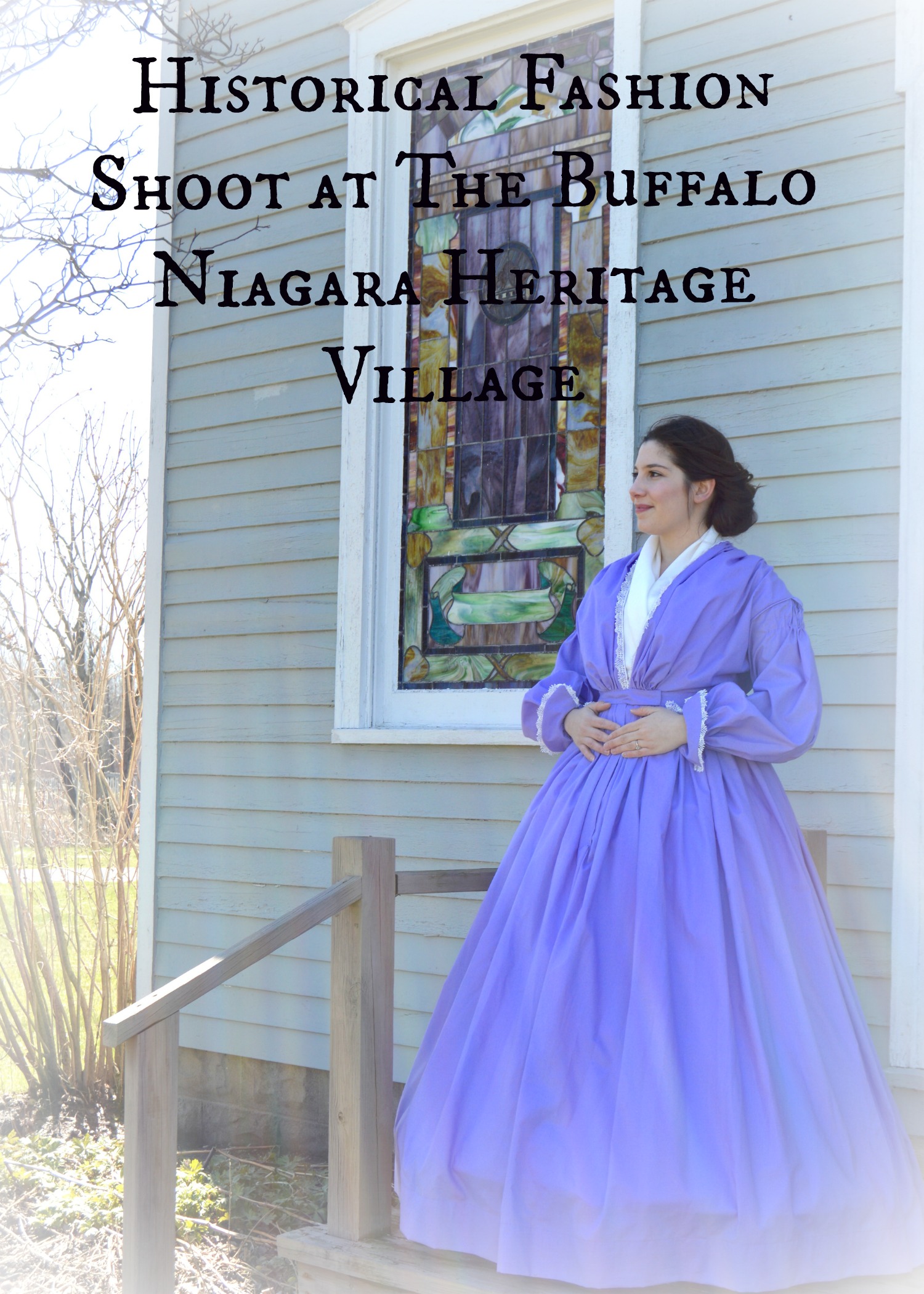 Last Saturday, I had the extreme privilege of being allowed special access to photograph my gowns in and around the historic buildings belonging to the Buffalo Niagara Heritage Village.    This museum not only features many wonderful exhibits for both young and old, but they also have twelve historical buildings that have been painstakingly and lovingly returned to historical accuracy.  A truly wonderful place for the whole family where you can take a step back in time!

Here are a few outside pictures of the buildings apart of this wonderful village!

Anyways!  This past Saturday, I loaded up a a variety of gowns, two great friends, and spent a fabulous afternoon enjoying the warm sunshine and all things historical!!

A big thank you to Buffalo Niagara Heritage Village for opening up their doors!  We all had a great time and I think the buildings did too! 🙂

Many of these gowns are available for purchase on my Etsy Shop!

Have you joined my Facebook Group Inside Aimee’s Armoire?  Join now to connect with other historical fashion enthusiasts! 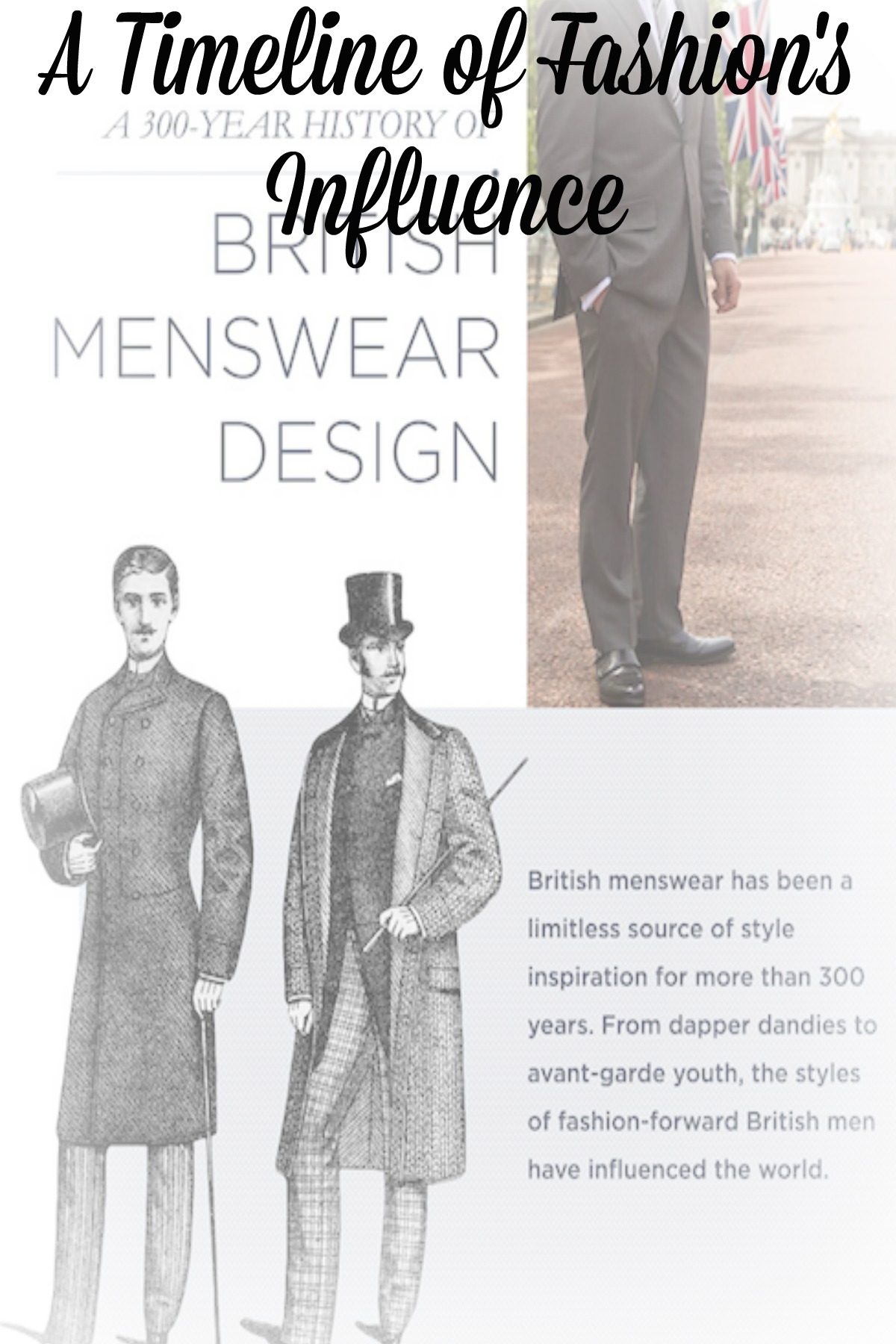 A few weeks ago, I was contacted by the British men’s clothing company T.M. Lewin.  While I never have personally purchased clothing from them, I was very aware of the name and longevity. Established in 1898, they have spent the past one hundred years providing high quality men’s clothing and are well-known for the introduction of the button down shirt.  So what, may you ask, is a men’s clothing store doing reaching out to me, a women’s historical clothing blog?  Well, the company wished to celebrate 300 years of British influence on men’s fashion and wondered if I would be interested in participating.  At first, I wasn’t sure what I could do.  I mean, I enjoy men’s clothing, but enough to write about it?  I just wasn’t sure.  So I thought and spent some time studying the fabulous timeline graphic they sent me, and realized the large connection between men and women’s clothing. I thoroughly enjoyed my time researching and loved finding examples of women’s fashion that directly corresponded with men’s.

So, with all that said, I decided to participate in their celebration…but with my own twist.  Below you will find sections of their timeline along with examples of women’s fashion which bears influence and connection….although with a bit more grace and femininity!

I choose to highlight the floral impact on fashion for this particular century.  While today, most individuals equate floral prints exclusively as women’s clothing, that was not always the case.  Notice the embroidery on the men’s suit, along with the influence on the floral print of the women’s gown below!  Both are absolutely stunning!

I have a slight obsession with anything Regency.  I just do.  So clearly, out of this century, I had to pick something from the 1810’s.  And what better choice than showing examples of the riding coat!

My second choice to highlight from this century is the Sack Coat from the years 1850-1860.  A loose fitting outwear garment that was worn by both men and women.  Similar in shape, color and decorations were the two only real ways that this coat differed.

From this century, the first item that stood out to me is the trench coat.  A item that is just as popular today as it was a hundred years ago.  Similar in color and shape, women tweaked this item to create a coat known as a duster.  A handy little item used to protect one’s gown from those dusty automobile rides!

Of course, post on 20th century fashion would not be complete without a little 1940’s love.  With the suit a well established staple for men, women, especially during the second world war, followed suit…no pun intended! 🙂  Similar in pattern and shape, both genders embraced the structured look the suit of the 1940’s offered.

This reciprocal exchange of fashion influence will continue to shape fashion for decades, and I daresay, centuries to come.  But with tweaks here  and there, each gender can appreciate and enjoy something unique!

Many thanks to T.M. Lewin for inspiring this post!! 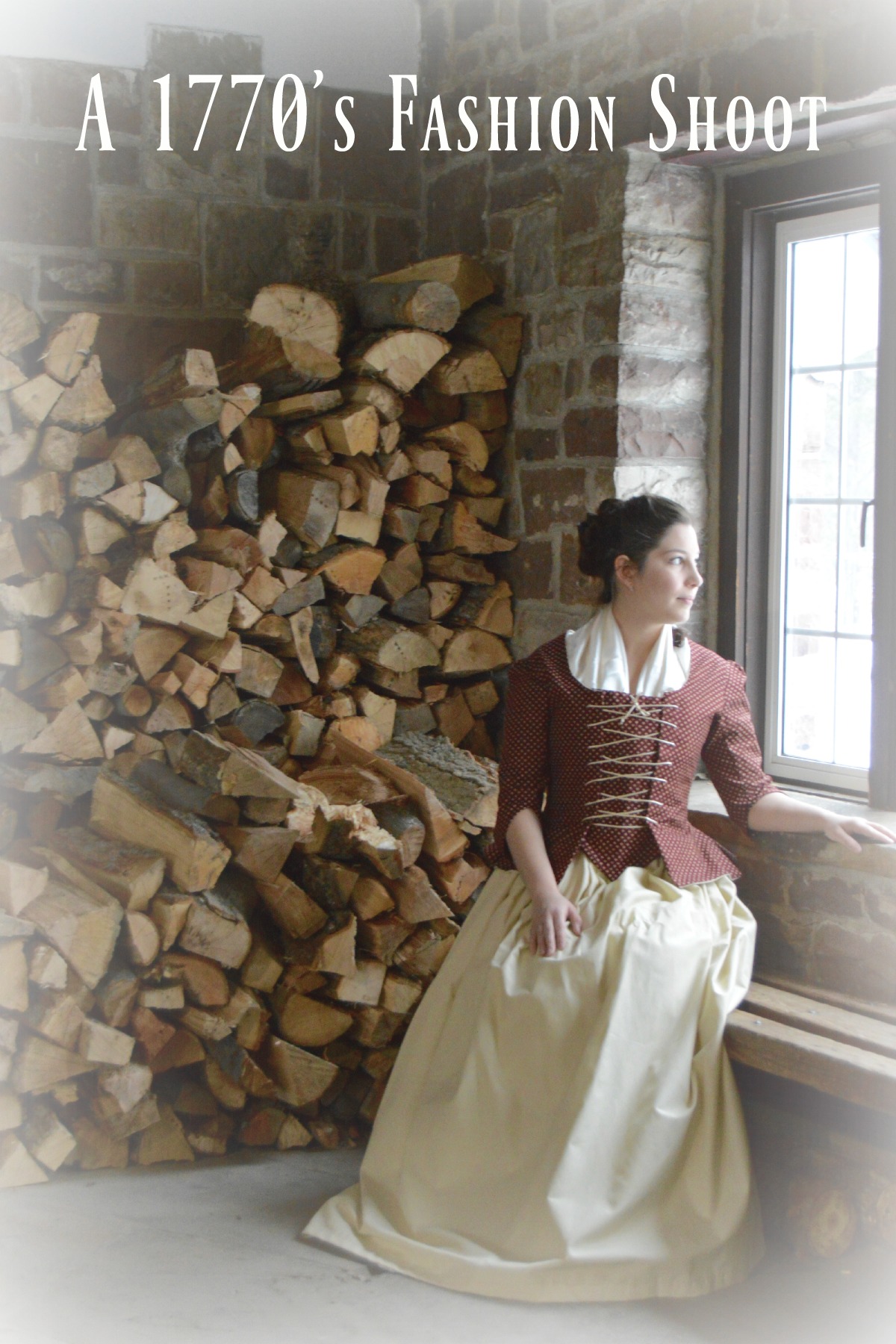 What better way to start off the new year than with a historical fashion shoot!  This particular shoot highlighted two new 1770’s gown I created last month.  Which was a miracle I was able to get any sewing done, since I spent quite a few weeks hugging the toilet….I’m four months pregnant just in case you missed last week’s post! 🙂

Anyways!!!  I am so happy to be feeling better and what better way to celebrate than with a wonderful snowy day and some wonderful photographs. So with a big thank you to my model Cassandra, here are a few of my favorite images from this fun photo adventure!

Both gown are currently for sale on my Etsy Shop along with many new Regency custom order listings!

Have a fabulous Wednesday everyone!