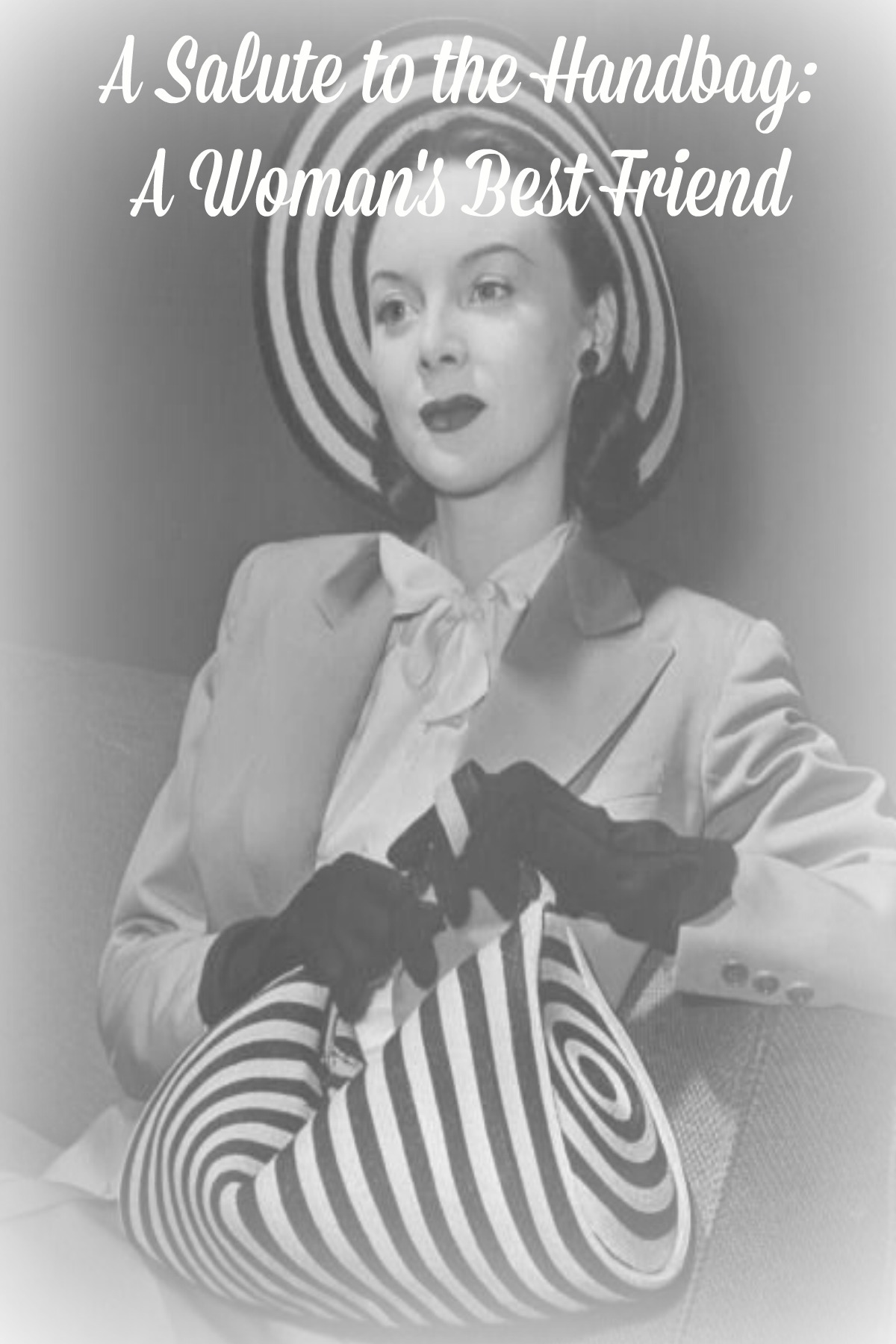 What age were you when you started carrying a purse?  Was it a gift?  A well-thought out purchase or a hand me down from a cherished family member?  Whenever and however you began carrying a handbag, you joined the ranks of millions of women who came before.  While the history of the purse extends to the earliest of civilizations, I want to focus on it’s look and evolution during the first half of the 20th century.  So whether you call it a handbag or a purse, let’s take a little trip down handbag lane!

Following the advancements in the area of transportation (an overview is available in the post  The Golden Age of Travel) luggage companies began crafting smaller suitcases, called handbags, for the traveling woman.  These newly designed mini suitcases began to offer new, and more structured options in which to carry one’s things.  Before this alteration in luggage, women mostly used smaller, more dainty purses called reticules.  While never completely disappearing from the fashion scene, reticules saw reduced use as the turn of the century advanced.

An example of a reticule as seen in a Ladies’ Fashion Book.

An example of smaller luggage available to replace the unwieldy steamer trunks.

With the modern era advancing at the turn of the 20th century, the handbag began altering to the new needs of women.  Becoming less a piece of luggage and more of a daily accessory, women began carrying purses on a daily basis and to a variety of locations and occasions.  At first, many of these new styles were only meant to carry a few items as it was viewed more ladylike to carry as little as possible.  Yet, like many things in fashion, need over weighed the fashion rules, and handbags began to grow in size as women reached further and further into the business world.

A smaller handbag carried by a young woman on a mission in the early 1900’s.

Pockets, zippers, and smaller makeup bags became the hallmark of the modern handbag, as advancements in technology and cosmetics meant women were carrying and purchasing more.  But styles changed for other reasons as the end of WWI brought with it new opportunities for women, one of the most important being the reduced use of the corset.  With women’s fashion becoming freer and loser, so did the accessories they carried. Purses such as the “pochette” or clutch, became synonymous with the youthful loving and freedom chasing women of the 1920’s.

An example of a smaller, more vividly decorated purse from the 1920’s.

Elegant and refined describe this woman from the 1920’s.

By the 1930’s, the four shapes we most associate with handbags emerged and were solidified: the handbag (simple shape with clasp and handles), the clutch, the shoulder bag, and the satchel.  While materials and colors changed over time, the basic shape and outline have maintained some form of consistency.  But much like the 1920’s purses, handbags of the 1930’s featured bold patterns and colors as the art deco look was still firmly in place.  It wasn’t until the start of WWII, where simplicity, rationing, and efficiency became the ideal mark of a properly designed handbag.

A stunning over the shoulder handbag. 1930’s

I love the handbag carried by the woman in the middle with it’s gold clasp and handle. 1930’s

In addition to the restrictions war placed on clothing, women of the early 1940’s began shifting  towards the shoulder bag for its ease of wear, larger size, and minimalistic look.  Taking it’s inspiration from the military, these over-the-shoulder designs fit in with the new modern women eager to do their part.  As war’s end gave way to a rebirth of consumerism and Christian Dior’s New Look, handbags underwent the same evolution of style, fabric, and design, overruling practicality and usefulness.  The trend continued on into the 50’s with eventual acceptance of all shapes and sizes.

Women in WWII with their matching shoulder bags.

A variety of options were available for the average woman in whatever style and shape that suited her!

Some women viewed handbags like shoes…a different pair for everyday, and therefore with an affordable price tag to match.  I, on the other hand, view the handbag as worthy of an investment.  Find and purchase the highest quality you can afford in a style that is neutral enough to go with the majority of your outfits, and revel in the sophistication it can offer.

Though shapes, styles, and fabric may change, the friendship a good purse offers is undeniable and priceless!

5 thoughts on “A Salute to the Handbag: A Woman’s Best Friend”