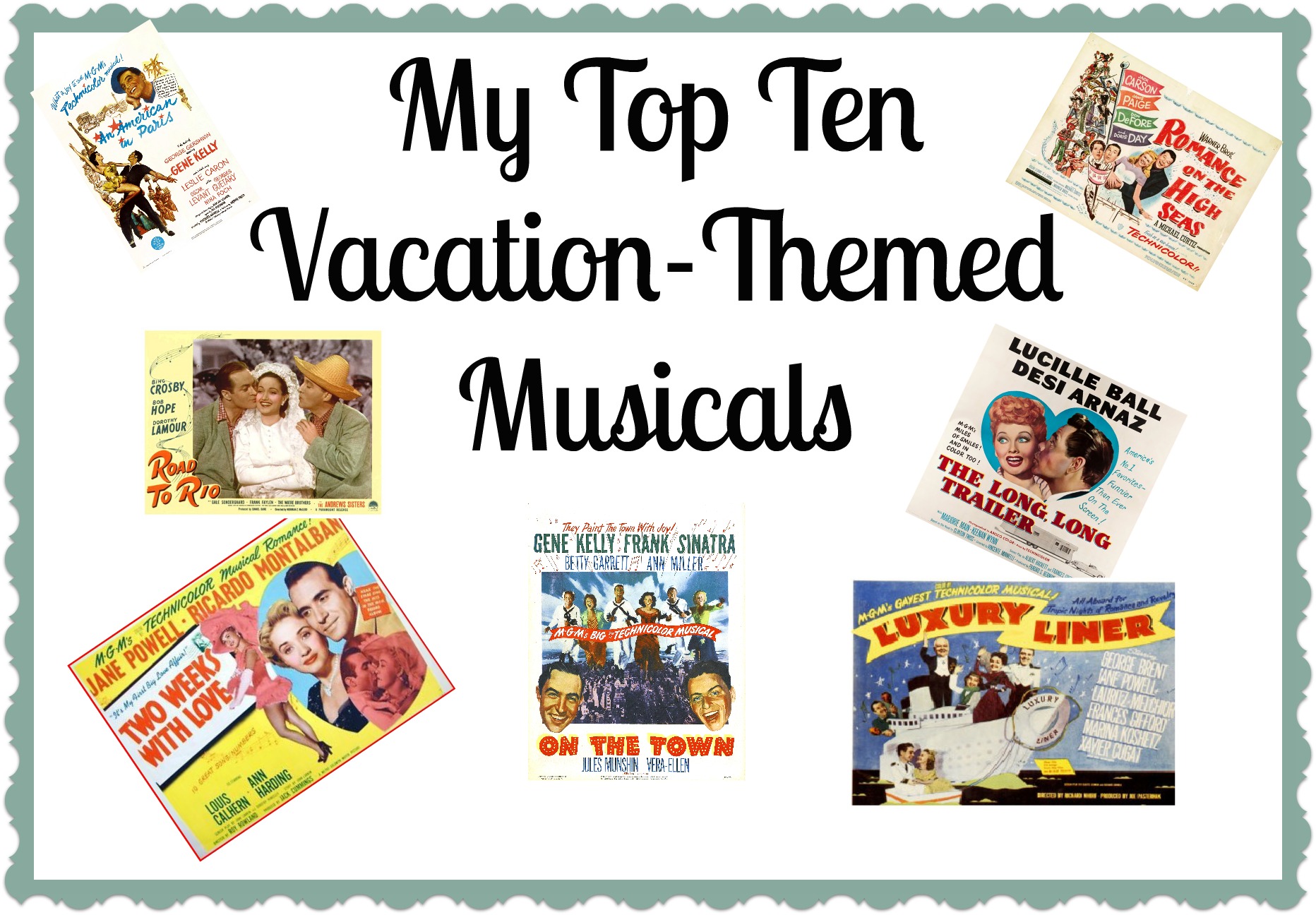 Since I was a young child, I have absolutely loved musicals from “Old Hollywood.”  You know, the ones where only mild drama ensues, the boy always gets the girl, and the background characters always seem to “know” all the words and the choreography.  I started watching them with my grandfather and would always make him laugh when I showed him how I could recite the entire opening scene of The Music Man…at eight years old.

I have continued to enjoy these films and have found new delightful additions to my musical library.  In fact, whenever my mom comes to visit me, we pull out our favorites and get “taken away” to another time and place.

And since this month is all about “Going on Vacation” whether you stay at home or hit the road, I have decided to share with you my top ten favorite “vacation-themed” movies.

America’s sweethearts play the adorable newlywed couple, Nicky and Tacy, who decide to save money by buying a trailer as they head out to Colorado.  This film is full of slapstick comedy, silly stunts, and a fun song or two. The clothes, decoration, and scenery make this trip a must-see!

A young girl, played by Jane Powell, is anxious to become a famous singer, so she stows away on a star-studded ocean liner….of which her father is the captain.  Wonderful cameos of Xavier Cougart and the Pied Pipers add to this colorful ocean musical!

Another of my favorites, this sweet coming-of-age story, stars Jane Powell (she is in many of my favorites) as a teenager joining her family for their yearly trip to the Catskills.  Set at the turn of the century, this movie is made even better by a young Debbie Reynolds who adds her usual spunk and energy!  With the caption “it’s my first big love affair” and the promise of amazing singing, this movie is timeless!

Need I say more?  This film is truly a classic.  Even though it may not be a musical, it’s artistic story of a bored princess who finds herself through the help of a news reporter, is as magical as the title..and it’s location!

Another Jane Powell classic made even better with the addition of Fred Astaire and the debonair Peter Lawford.  A dancing brother and sister team (Powell and Astaire) travel to England just in time for Queen Elizabeth II wedding.  Each find love in unusual places with the help of their singing and dancing!  Another interesting feature of this film is Winston Churchill’s daughter Sarah, who adds her own charm!

This is really an all star line up with amazing dancing, singing, and romance!  The basic premise revolves around three sailors who are on leave in NYC for only 24 hours.  They each have separate ideas for their brief stay…some of which don’t go according to plan.  A true musical classic!

Set on a lovely ocean liner, this colorful film focuses on some hilarious misunderstandings between spouses along with a night club singer traveling under a false name. The outfits and hair in this movie are stunning and make it a feast for the eyes as well as the ears!

This whole musical is likely to get stuck in your head for days after you watch it!

A sweet family heads off to the Iowa State Fair for contests, food challenges, and of course, love.  With amazing song and dance numbers along with great acting, State Fair is one of my favorite summer musicals!

While the premise may not seem too original, the music truly is!  Gene Kelly plays a struggling American artist in Paris, who among with friends, attempts to make his way in the City of Love.  But when two of the three friends fall for the same girl, events become more complicated.   My favorite song “S Wonderful” never fails to make me smile…. 🙂

I love all of the “Road” movies and find the comedy duo of Crosby and Hope hilarious!  This particular adventure takes the two friends down to Brazil in order to save a beautiful girl from an unhappy marriage.  Dorothy Lamour gives a wonderful performance with the song “Experience” along with a surprise cameo of the Andrew Sisters who sing “You Have to Know the Language” with Bing Crosby.

So grab a bowl of popcorn, a cozy blanket, your favorite spot on the couch, and be prepared to get carried away!!